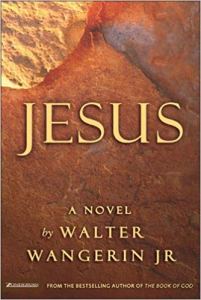 This book is a novel written as a biography of Jesus.  It takes stories from the gospel accounts and fills in dialogue, feelings and thoughts and puts them into a collected narrative of Jesus’ life.  It’s written primarily from the perspective of two people – John the beloved disciple and Mary the mother of Jesus.  It covers Jesus’ entire life and even gives a small epilogue of John’s life after the ascension.

All in all I liked the book.  Wangerin is a good writer, albeit one with a unique perspective (if you’ve ever read his first book – The Book of the Dun Cow – you’ll know just how unique) and he keeps you interested from start to finish.  Even in places where I didn’t necessarily agree with the characterizations, I enjoyed reading the author’s take on the different events and how he shows people responding to and interacting with Jesus.  The way he weaves the miracles into the story and makes them believable is fascinating.  Wangerin even ties together different stories just to make things more interesting (he has a Pharisee who’s wowed by a 12-year-old Jesus – when He goes missing after the Passover – be one of the ones plaguing him the most when His ministry starts 18 years later; he has Barabbas be a Nazareth native around the same age as Jesus and the son of a friend of Mary’s [and has Mary standing next to his mother when Pilate offers either him or Jesus as the prisoner to be freed]).

The characterizations that were a little questionable to me were Peter and Judas.  Peter is depicted as a big lug without much of a brain.  I’ve never thought of Peter as being a huge guy but I guess there’s no reason he couldn’t be.  But showing him as kind of a big-hearted giant without much capacity to think doesn’t jibe with his sermon in Acts 2 or in him being the source of Mark’s gospel or the books of I and II Peter.  He definitely was impulsive, but to show him as a big galoot seems way too one-dimensional.  Also, Wangerin takes a really interesting approach to Judas.  He shows him as a naïve 19-year-old bent on personal glory.  As far as I know, there’s no reason to think that Judas was younger than the other disciples but I guess there’s no reason he couldn’t have been.  But I don’t know that showing him as mostly immature and selfish paints an accurate picture.  My reading of the gospels (and I don’t hold myself out as an authority by any means) is that Judas betrayed Jesus after he realized that Jesus wasn’t going to usher in a political kingdom when He came to Jerusalem for the Passover.  Once he saw that Jesus wasn’t going to capitalize on the triumphal entry and the raising of Lazarus, he went to the religious leaders and offered Jesus up because he saw there was nothing in following Jesus for him.  Wangerin does portray Judas as looking for personal glory, but he has Judas betray Jesus with the thought that getting arrested will force Jesus’ hand and make him use His power to save His life and effectively overthrow the religious and governmental authorities (Wangerin does include a scene that’s pretty compelling – he has Judas find John during Jesus’ trial and ask him why Jesus allows Himself to stay arrested – why doesn’t Jesus call down angels and destroy all His enemies?).  That seems like a nicer way to portray Judas than I imagine him.  I think Judas was bitter, vindictive and greedy (remember that he was stealing from the money box).  Both ways of looking at Judas, however, allow for Judas to regret what he’s done and commit suicide.

The portrayal of Jesus is also at times a little odd.  Jesus tells Judas to ‘shut-up’ at one point and refers to Peter once or twice as ‘Rocky’ (Peter’s name means rock, remember – Jesus does not, however, refer to Peter’s wife as ‘Adrian’ or anything like that).  Wangerin also includes a scene toward the end of the book where Mary Magdalene essentially professes her love for Jesus as if she wants to be His wife (she doesn’t do this verbally – it’s more like a pseudo-wedding in a very odd scene I didn’t really understand).  I wasn’t really sure where he was going with that.

The only omission I thought of was the book says nothing about Jesus’ brothers and sisters.  Wangerin skips this entirely and makes Mary the mother of Jesus alone.  This enables him to have Mary live out her life with John after Jesus charges him from the cross to take care of her.

His portrayal of Mary is actually one of the neater parts of the book.  Here’s where there’s so little in the Bible that he was really free to do just about whatever he wanted, and he does a good job of showing how difficult it likely was for Mary to move from mother to disciple.  Jesus never stops treating her tenderly and respectfully, but there’s no doubt that their relationship changes once He begins His public ministry (something implied in John’s account of the wedding at Cana in John 2:4).  How she deals with that and with Jesus’ words and actions regarding His death make up some of the more thoughtful parts of the story.

My few quibbles aside, the book is a good and compelling read.  If you’re familiar with the gospels – and really, even if you’re not and want to become more familiar with them – this is a fun book that will force you to use your imagination and also to consider things you might not have thought about when you’ve read the gospels before.  It’s an easy read and keeps your interest – I’d definitely recommend it.