This is a true story that took place at the turn of the 20th Century in New York.  The essential facts of the story are as follows: A sixteen-year-old girl – Evelyn Nesbit – arrives in New York in 1901 and meets a wealthy, influential man three times her age – famous architect Stanford White (designer of the Washington Square Arch and the second Madison Square Garden).  Stanford White lures Evelyn Nesbit to his home on a pretext, drugs her and sexually assaults her. Four years later she marries a millionaire playboy, Harry Thaw, who – in retribution for the rape she’s told him about – shoots and kills White in cold blood in a crowded theater on the roof of Madison Square Garden.

Those are the essential facts.  The book is about what led up to the alleged rape (and by the way, that’s the “sex” referenced on the sensationalist cover – there’s no sex in the book other than the circumstances surrounding the alleged assault), the very bizarre relationship Evelyn and White had even after the rape occurred (they continued to be friends and she continued to escort him to social functions), and what happened to Harry Thaw and Evelyn after Thaw murdered White.  The last portion takes up the last forty percent or so of the book and actually is the least interesting.  The details around Thaw’s trials and prison sentences become a little tedious.

A few items to fill out the story in case you’re interested: Nesbit acted as her mother’s meal ticket when she was just fourteen.  Her mother was a widow without any means of support after her successful lawyer-husband died.  She found out, however, that her very pretty daughter could be a successful model posing for numerous artists and photographers in Philadelphia (the family’s hometown).  She also found out that if she moved the family to New York, her daughter’s looks could earn them even more modeling money and land Evelyn a role in a Broadway chorus and introduce her to influential men.  Her mother was fine with Evelyn posing for alluring pictures and being squired around New York by middle-aged men even at fifteen and sixteen years-old (her mother later testified against Harry Thaw and contradicted her daughter’s claim of rape – she never believed Stanford White was capable of such a thing – good ol’ mom).  As for Evelyn, she liked the attention of the men she met and loved being on Broadway (even if she sometimes chafed at being her family’s main means of support).  She met Harry Thaw after her relationship with White had cooled and married him against the advice of just about everyone who knew him.  She was attracted to Thaw’s wealth and his almost obsessive pursuit of her.  They wed when she was 20 and he 34.

Harry Thaw was arrested for murdering White but was declared not guilty (after two “trials of the century” with enormous publicity and hysterical press coverage) by reason of temporary insanity (a claim never before tried in American jurisprudence). The trials were very damaging to his reputation, however, as it came out that he was an alcoholic and drug addict, that he liked to lure young women to hotel rooms and whip them (then buy their silence), and that he had a history of mental illness going back to his childhood (something his mother tried in vain to keep from coming out so as to protect the family name).  Evelyn also came out of the trials worse for the experience.  In testifying for her husband’s defense she had to humiliate herself by publicly admitting she was raped (as you can imagine, something that was looked at much differently than today), then was made to look ridiculous by the prosecuting attorney when she admitted that even after the alleged rape she remained involved with White (in the end, there’s no way to know if the rape actually occurred – it could be that she was so naïve as a teenage girl that White was able to convince her that what happened was normal behavior and they could remain friends – on the other hand, she may have fabricated the whole story just to defend Thaw – her continuing friendship with White always made her claims hard to believe).

Beating the murder rap was a hollow victory for Thaw as he was sentenced to life in The Matteawan State Hospital for the Criminally Insane.  After serving several years of the sentence he escaped and made it to Canada, only for his fame to betray him as he was brought to the notice of the Canadian authorities and eventually extradited back to New York.  There he secured a new trial wherein he was found not guilty and not insane and set free.

The remaining lives of the main characters weren’t all that happy.  Evelyn Nesbit gave birth to a son while Thaw was in the asylum that she claimed was his.  Since she hadn’t seen him in several months at the time, this was always treated with skepticism (and Thaw denied paternity to his dying day).  She went on to act in several B-grade movies but never achieved the fame she once had as Stanford White’s paramour and a New York supermodel.  She wrote an autobiography in the thirties that was almost immediately panned for its revisionist account of almost everything.  She eventually faded away after a series of broken marriages and discarded relationships.  She died in California in 1967 at the age of 82.  Two years after he was set free from the asylum, Harry Thaw was charged with kidnapping, beating and sexually assaulting a teenage boy.  He was tried and found insane and sentenced again to an asylum where he lived for roughly seven years until he was judged sane and released.  He lived another 23 years and died in 1947 at age 76, apparently with no further criminal issues after his second incarceration.

I probably haven’t made you want to read the book, have I?  The book is actually well-written, well-researched, and generally interesting to read.  The problem is that there’s absolutely no one to root for – no one has any character and no one thinks of anyone other than him or herself.  The other problem with the book is that you get to the end and think, “What was the point of that?”  Since no one goes on to any great fame or achievement, the whole exercise seems kind of pointless.  The good part of the book is that it gives a window into a way of life that was truly extraordinary.  Turn of the century Manhattan socialites living the high life.  Broadway stars, wealthy businessmen, restaurant and theater owners, all the elites celebrating a standard of living way beyond the means and imagination of much of the population (“Let me tell you about the very rich.  They are different from you and me.” ~ F Scott Fitzgerald).

The title of the book comes from something Stanford White had in his home.  He had a large townhouse with multiple floors.  On one of the floors with a very high ceiling he installed a swing with red velvet ropes.  The swing was a toy for his party-guests wherein they would try to swing high enough to kick through a paper parasol hanging from the ceiling.  Sounds totally normal, doesn’t it?  Who among us hasn’t been to a house that has a big velvet swing for when company is over?  There was actually a movie about Evelyn Nesbit made in 1955 that had a similar title – The Girl in the Red Velvet Swing (Evelyn herself was an advisor for the movie and as a result it too was a revisionist take on her story).  It starred Joan Collins as Evelyn and Ray Milland as Stanford White.

So would I recommend the book?  Well, heck, you’ve read this review so I’m not sure you even need to read it.  But like I mentioned before, it’s well-written and keeps your attention – and there’s certainly a lot of salacious material to keep the pages turning.  But the book really slows down once Harry’s arrested and goes on trial, and in the end you do feel like you spent a lot of time invested in people who didn’t deserve it.  So I’ll leave it up to you.  If you read it, I won’t blame you.  If you pass, I understand. 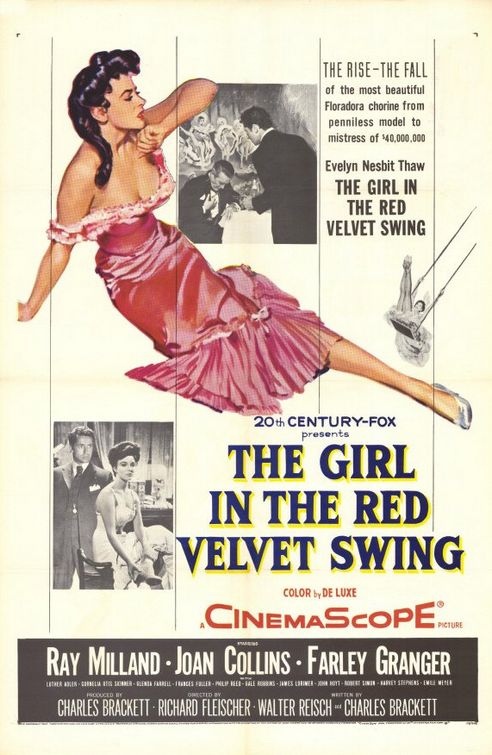