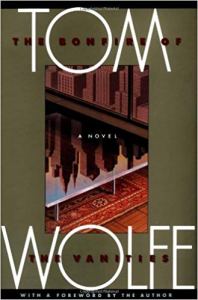 Written as a social commentary on race, class, politics and greed in the eighties, this book came out in 1987 and is Wolfe’s best-known work of fiction (and rates with The Right Stuff as one of his best-known books overall).  I’m a little late to the party in reading it, but when he died earlier this year it piqued my interest in his books and reminded me that I’d never read this one (I did read The Right Stuff many years ago).

The book is a good read – a summer-type page-turner.  The main character in the book – Sherman McCoy – is a very successful bond-trader (a self-styled “Master of the Universe”) living the high life in Manhattan.  He’s involved in a freak accident in the Bronx wherein a black youth is killed by his car driven by his mistress (with him in the passenger seat).  That establishes the drama in the story: He was in a place he shouldn’t have been with someone he shouldn’t have been with, and he’s an affluent white man responsible for the death of a minority youth in a city that’s already simmering with race and class differences.  The story grows out of those facts and includes a black activist (think Al Sharpton-esque), a working-class prosecutor from Brooklyn, a tabloid journalist (think TMZ), and a politically ambitious District Attorney facing reelection and under pressure to show that the wealthy are treated the same as everyone else.

The book is well-written and keeps your interest.  The ending is a little odd and not entirely understandable, but not enough of a problem to warn you away from the story.  If you like fiction and satire and modern dramas – it’s worth your time.  There’s also a movie – that I haven’t seen – with Tom Hanks, Melanie Griffith, Bruce Willis, and Kim Cattrall, that was, according to Wikipedia, a commercial flop – if you want a quicker way to hear the story.

One thought on “The Bonfire of the Vanities – Tom Wolfe”