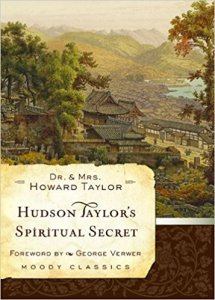 First of all, this isn’t a particularly well-written book.  The authors introduce characters and events with no background or context, and their ability to stay on topic is a little lacking.  I also don’t know that they’d be considered good writers generally.  Second, though the book is essentially a biography, it’s not really written that way.  The purpose of the book is to give insight into Hudson Taylor rather than recount his life’s story.  Consequently, many events are either left out or just referred to casually, and the detail you’d expect in a proper biography isn’t there.  The book was written in 1932 by Taylor’s son and his wife (Dr. and Mrs. Howard Taylor – it was 1932 so she didn’t put her first name on the book), and they write as if their readers already know a lot about Hudson’s life.  That’s why they apparently didn’t feel the need to explain everything.  It makes for some frustrating reading and I actually almost put the book down after a few chapters.

I kept going, however, and I’m glad I did.  Because for all the shortcomings in the book, nothing takes away from the fact that the subject of the book was an AMAZING man and his perspective on life is incredibly challenging and humbling.  I’ve never read much about Hudson Taylor.  I’ve known who he was and that he started the China Inland Mission, but that was the extent of my knowledge.  Reading about him here truly challenged my whole perspective on life as a believer, and made me realize I’m essentially the prototype for what he would’ve disdained as a life wasted on comfort and ease rather than spent for the kingdom.  What he did, and his commitment to the gospel and his abiding in Christ at all times and in every pursuit (and through incredible hardships) was sobering as I read it and compared myself to it.

One of the things I didn’t know was that Hudson Taylor and George Muller were contemporaries.  I’ve read some about Muller and know his story a little, but didn’t know the two were ministering at the same time.  Both took the same approach to raising money for their ministries – they didn’t.  Both refused to solicit funds in any way.  They depended wholly on prayer.  And, in Muller’s case, he not only prayed for his own ministry, he also actively prayed and gave to Taylor’s mission out of the funds that God provided to the orphanage.  He actually took on the support of many of Taylor’s missionaries himself and did so without any means of supporting them other than prayer.  The Muller connection wasn’t a large part of the book, but it really impacted me to see both men taking the same approach and both witnessing God work in incredible ways.

Two passages from the book give a good sense of what it’s about.  Both are quotes from his letters.  The second quote is one I hope to meditate on throughout the rest of my life:

The sweetest part, if one may speak of one part being sweeter than another, is the rest which full identification with Christ brings.  I am no longer anxious about anything, as I realize this; for He, I know, is able to carry out His will, and His will is mine.  It makes no matter where He places me, or how.  That is rather for Him to consider than for me; for in the easiest position He must give me His grace, and in the most difficult His grace is sufficient.  It little matters to my servant whether I send him to buy a few cash worth of things, or the most expensive article.  In either case he looks to me for the money and brings me his purchases.  So, if God should place me in serious perplexity, must He not give me much guidance; in positions of great difficulty, much grace; in circumstances of great pressure and trial, much strength?  No fear that His resources will prove unequal to the emergency!  And His resources are mine, for He is mine, and is with me and dwells in me.

There is a needs-be for us to give ourselves for the life of the world.  An easy, non-self-denying life will never be one of power.  Fruit-bearing involves cross-bearing.  There are not two Christs – an easy-going one for easy-going Christians, and a suffering, toiling one for exceptional believers.  There is only one Christ.  Are you willing to abide in HIM, and thus to bear much fruit?

As to whether or not I’d recommend the book?  Not sure, other than to say if you don’t want to read this book I’d encourage you to read another book on Taylor.  He started the China Inland Mission in 1865 essentially by just deciding to do it and by prayer.  It still exists today (the name is now Overseas Missionary Fellowship), 152 years later, and still remains true to its original purpose.  That’s all you really need to know about the man and his ministry and his trust in God.