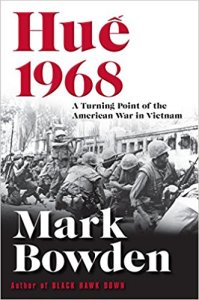 I’ve read probably three or four books by Mark Bowden, and enjoyed them all.  This book is about the battle of Hue, the second largest city in South Vietnam, that took place as part of the Tet Offensive in January and February of 1968.  The Tet Offensive was largely a military failure – the North Vietnamese didn’t hold anything they attacked for very long and were beaten back from almost everywhere.  The one place they WERE successful, however, was in Hue.  They overran the city and held it for almost a month.  And the process of taking it back – by American and South Vietnam forces – was brutal and bloody.  By taking it, the North Vietnamese and the Viet Cong showed they could fight face to face with the US, and that they could logistically manage a large-scale military operation.

The battle showed that all the rosy forecasts the US military and politicians were giving the American people weren’t true.  The North Vietnamese weren’t on the run and the US wasn’t on the cusp of victory.  Consequently, Hue is the battle that effectively ended the trust the American people had in the whole process.  It was the turning point that made anti-war sentiment extend beyond just hippies and draft-dodgers.  After Hue, skepticism of the Johnson Administration and the military spokesmen spiked and never came back.  It was the battle that showed everyone in the States that the reality of what was happening in Southeast Asia was much different than what they’d been told.

The book is a comprehensive account of the entire battle – the author actually did enough research to where he could give information about both sides.  He tells what was happening in the city just before the invasion, how the North Vietnamese were able to move men and materiel to the city for weeks beforehand without being noticed, and how completely the South and the US were taken by surprise once the attack occurred.  He then gives a blow-by-blow account of the two sides fighting over the next month – the North retreating and the South/US slowly taking the city back.  He finishes with an epilogue of sorts at the end.

I’m not the most military-minded guy in the world, but I enjoyed it.  If you like 20th Century world history and have any interest in the Vietnam War, this is a book for you.  Another positive is that he stays fairly balanced.  He doesn’t just do the liberal look-back that makes everyone who prosecuted the war look like an idiot or a war criminal.  He does a good job of showing both sides and the positives/negatives of each.

After reading three of his books, I think I’d recommend just about anything Bowden writes.