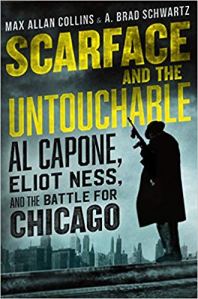 Enormously comprehensive book about Al Capone and the effort to shut him down mounted by Eliot Ness and his ‘Untouchables.’  If you like gangsters and like Prohibition history, this is a really good read.  It’s essentially a biography of both men and gives a great picture of what Chicago was like in the 1920s and early 1930s during Prohibition (summary of living conditions: you didn’t want to live there unless you had a Tommy Gun and a driver).

If you saw the movie The Untouchables with Robert DeNiro, Sean Connery and Kevin Costner, it’s worth reading this book to find out all the things that the film got laughably wrong.  It was a good movie and kept your attention, but Eliot Ness wasn’t anything like the Costner character, nobody threw Frank Nitti off a building (he actually took over Capone’s gang after Capone went to prison) and no judge could’ve exchanged a jury that was already seated with another jury from a different trial.

Capone was a really interesting character and the book focuses more on him than on Ness.  He had a great sense for the business side of bootlegging and gambling, and if he would’ve been legitimate he likely would have been very successful.  As it was, he was very successful and VERY rich (making millions in the 20s and 30s) for as long as the fun lasted.  His downfall was his notoriety.  He liked the limelight and liked the flash his wealth afforded him.  His gang – known as The Outfit – decided he was more trouble than he was worth and likely sabotaged him in his trial to get rid of him.  The Outfit then continued to operate even after Prohibition was repealed by infiltrating labor unions and liquor suppliers.

Capone was actually taken down by the Treasury Department, not Eliot Ness.  The government went after him in every way it knew and shut down lots of illegal breweries and stills, but it could never pin anything directly on him.  There were too many layers between Capone and the actual guys doing the work.  Consequently, the government decided to go after him for income tax evasion.  They took him to trial with a very weak case – they had no proof of his income so they simply sited his lavish lifestyle.  The only financial records they had was from a ledger that was beyond the statute of limitations and likely would’ve been discredited had Capone’s attorneys questioned it.  His attorneys, however, did very little to challenge the prosecution and actually hurt him with their defense.  Their strategy was so bad the prosecution actually referenced it to further their case in their closing argument.  The performance of Capone’s attorneys was so inept that many now think they were on the take from The Outfit.  The bottom line to the trial, however, was that Capone stood no chance.  Jurors interviewed many years later said they would’ve voted to convict regardless of the sufficiency of the government’s case.  They read about Capone’s activities every day in the paper and knew what kind of man he was.  This is where his notoriety hurt him – he was too well-known for The Outfit to keep him and too well-known for any jury of his peers to exonerate him.

He ultimately served seven years of a 12-year sentence – some of that time in Alcatraz (where the government would never have sent anyone else convicted only of tax evasion).  The combination of the harsh treatment he received in prison and the effects of Syphilis (which he’d contracted many years earlier in his younger days) meant that he left prison essentially insane.  He lived the last years of his life in his Miami home talking to himself and to people long dead (some of whom he’d had killed).

As for Ness, the reason he and his men were called ‘The Untouchables’ was that they were incorruptible.  In a city where many of the cops and government officials were on the mob’s payroll, Ness and his men stayed true.  Capone’s gang at one point offered him $2000/week if he’d just play ball and stop attacking them.  Remember, this was in the early thirties during The Depression – that was huge money.  Even though Ness’ salary at the time was $3800 per YEAR, he turned them down.  He and his group of men did in fact prove to be untouchable and were a huge problem for The Outfit even though they weren’t ultimately the cause of Capone’s demise.

I liked this book and recommend it if the subject matter interests you.  Understand, however, that it is truly comprehensive – it’s not a quick read.  The only negative I’d point to was the epilogue where the authors gave their opinions on Chicago’s changes over the years since Prohibition.  Since this had very little to do with the subject matter and since it was written through a particular political lens, it was essentially worthless.  That’s a small criticism, however, and shouldn’t deter anyone from reading the book.

I’ll leave you with a quote attributed to Al Capone but likely spoken by someone else.  It’s a fun quote nonetheless and sounds better if you imagine that he said it: “You accomplish more with a smile, a handshake, and a gun than you do with just a smile and a handshake.”