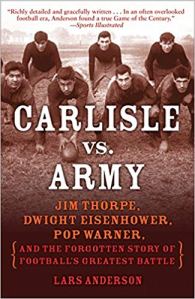 The book is ostensibly about two college football powers in the early twentieth century and specifically about a game where they met in 1912.  What the book is really is a detailed account of the Carlisle Indian School and its football coach – Glenn “Pop” Warner – and its most famous athlete – Jim Thorpe – along with a brief story about Army and its team that featured a decent player named Dwight Eisenhower.  The title should really have “Carlisle” all in caps and “Army” in lower case.

Before reading this I’d never heard of the Carlisle Indian School – started in the 1890s to educate and Americanize Indians (they lived at the school and weren’t allowed to speak their native tongue or dress in their native dress – the goal was to integrate them into society) – and knew little about Jim Thorpe, its most famous student.  Thorpe was probably the greatest all-around athlete of the first two decades of the twentieth century.  He won the Decathlon and the Pentathlon at the 1912 Summer Olympics, was considered the best college football player in the country, and in his off-times played professional baseball (which, when discovered by the Olympic Committee, resulted in him losing his amateur status and forfeiting his gold medals).

I’d heard of Pop Warner – mainly because of the leagues named after him – but knew nothing about him.  He came to Carlisle after having success at Cornell and came primarily because the Indian school was willing to pay him a much larger salary than he’d ever made and because he was impressed with how hard Carlisle played in a loss to Cornell.  Once at Carlisle he realized he had to coach differently because the Indian boys didn’t respond well to cursing and yelling.  Once he adjusted his techniques and once Thorpe came to campus, Warner took Carlisle to national prominence.

Warner’s team was consistently underestimated.  Even in the early 1900s there was a residue of the perception of Indians that was prevalent in the nineteenth century – that they were lazy and aimless and would never work hard enough to be successful at anything.  Warner took that perception and turned it on its head.  The Carlisle team became known for outworking its opponents and doing so against typically much larger athletes.  It also became known for innovation as Warner was a master at creating new ways to score and new ways to get Thorpe the ball (he also understood more quickly than most what a weapon the forward pass was after it was legalized in 1906).  Carlisle did things no other team did and no other team was typically able to prepare for.

The Army versus Carlisle angle in the book is somewhat contrived.  The 1912 game did involve two high-flying programs, but the game itself was nothing special (Carlisle won 27-6) and to title the book as if it’s the centerpiece of the story is a little bit of a stretch.  The book is really about Carlisle; the Army portion is there almost entirely because Eisenhower was on the team and the author wanted to include his story.

Thorpe left Carlisle and never really did anything more to live up to what he’d achieved at the school and in the Olympics.  He played some baseball and a little football, but never really found his place in the world.  He died pretty much in poverty in 1953 at age 65.  Thirty years after his death, the International Olympic Committee restored his Olympic medals.  Pop Warner retired from football a legend and the winningest (at the time) coach in history.  He’s still considered one of the all-time greats because of the innovations he brought to the game.  He died at age 83 in 1954.  Eisenhower – you might have heard – went on to some fairly notable achievements.

Recommendation for the book?  It’s worth your time.  It’s well-written and really interesting and has lots to say about events that haven’t been widely written about.  It also gives a great description of college football in its early form (we worry about concussions – they worried about deaths).  Even with the forced Army angle it’s a compelling read.  You’ll enjoy reading about kids succeeding in a world mostly stacked against them.