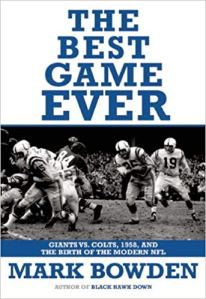 This is the third book by Bowden that I’ve read this year and probably fifth or sixth overall.  I’ve yet to be disappointed – he’s really good at whatever subject he takes on.  In this case, it’s the NFL Championship Game played on December 28, 1958, between the Baltimore Colts and New York Giants – considered by many to be the greatest game ever played.

Many things about the game were iconic or historic.  It was played in Yankee Stadium.  The two coordinators for the Giants were Vince Lombardi (offense) and Tom Landry (defense).  The head coach of the Colts was Weeb Ewbank (one of the best coach’s names of all time).  The quarterback for the Colts was Johnny Unitas.  The star running back for the Giants was Frank Gifford and the placekicker was Pat Summerall.  Other notables involved in the game were Raymond Berry, Alan Ameche, Gino Marchetti, Lenny Moore, Art Donovan, Sam Huff, and Rosey Grier.  All told, including coaches, there were seventeen future hall-of-famers on the field.

It was the first championship game to go to sudden death overtime.  As a matter of fact, it was one of the first NFL games of any kind to go to overtime.  Unitas said after the game that when regulation ended in a tie, the players had no idea they would play overtime – none had ever done it.  They all thought the game was over until the referee told the captains to come to the middle of the field for the coin toss.

The game had it all – lead changes, controversy, first-time happenings, and tons of drama.  With just over two minutes left in regulation, the Giants led 17-14 and had third down close to midfield in their own territory.  Gifford was given the ball and ran for what he thought was a first down.  On the play, however, Marchetti of the Colts was injured (he broke his ankle and had to be carted off the field).  In the ensuing confusion, the referee spotted the ball behind where the Giants (and Gifford to his dying day) claimed it should have been.  That meant they were faced with fourth and inches at their own 40 instead of first and ten.  The Giants decided to punt instead of going for it – a decision that was second-guessed later (the Giants coach decided that Landry’s defense could stop Unitas).  The Colts received the ball at their own 14, and Unitas engineered one of the first and most famous two-minute drills to tie the game.

The Giants won the toss to start overtime but went three and out.  The Colts then started driving and reached the Giants’ eight-yard line when someone ran on the field and delayed the game.  It later came out that it was an NBC employee sent on the field to give the network (which was televising the game nationwide for the first time) time to fix an outage that had just occurred.  It worked, and the viewers at home didn’t miss any action.  The Colts eventually won the game when Ameche dove across the line from one yard out (shown in the photograph on the book cover).

The game – because of its drama, the players involved, and its national television audience – really established the NFL and raised it in the sports consciousness up to baseball and basketball levels.  It started the league on the trajectory to the entertainment behemoth it is today.  It also established Unitas and other Colts players as national stars.

The book is a really good read.  Having just read the poorly-written and amateurish Ice Bowl ’67 about the other greatest game ever played, I was struck even more by how bad of an effort that book was and how well someone can describe a historic game if he actually researches his subject and cares about the end product.  If you’re a football fan and/or a sports historian it’s definitely worth your time.  The only mild criticism of the book I’d make is that Bowden went to college in Baltimore so there’s no question as to where his loyalties lie.  And as a native of Indianapolis, I can say that his epilogue about how the Colts were mercilessly stolen by Bob Irsay and spirited away to Indy neglects to mention – as all Baltimoreans invariably do – that by the time they left, the beloved Colts weren’t drawing any fans and weren’t so beloved.  But that’s a minor negative and shouldn’t dissuade you from reading.

Bottom line – it’s a fun and informative book and I recommend it.  And as for your reading plans overall, if it’s a Bowden book it’s probably worth picking up.

One thought on “The Best Game Ever – Mark Bowden”