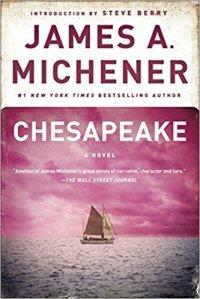 This book was written in 1978 and Michener died in 1997, so I’m a little late to the party in reading/reviewing it.  I picked it up because I was looking for something to listen to on a long car trip and I knew a Michener book would be just the ticket.  Lots of hours – over 46! (I didn’t finish it in one trip) – and a story that would keep my interest and make the hours go by.  I wasn’t disappointed.  The book grabs you after just a few pages and you’re interested in all the characters all the way through the 400 years covered by the book.

If you’ve read any Michener you know that he pretty much follows the same model in most of his novels.  Tell the history of a specific place through the lives of fictional characters and tell it over a huge span of time.  In this case he tells of the eastern shore of the Chesapeake Bay starting with the Choptank Indians in the 1500s through to the residents of the same area in the 1970s.  In the telling he gives a masterful and illuminating picture of slavery (in a state – Maryland – that was always conflicted by it – it remained a part of the North in the Civil War, but many of its residents had a much more southern perspective on slavery) and race relations, gives a great picture of the effects of the Revolutionary War and War of 1812, brings in colorful historical figures like Washington, Clay, and Calhoun, and explains the ongoing tension between eastern shore residents and their western shore neighbors in Virginia.  [Did you know that Virginia was named for Queen Elizabeth I (the Virgin Queen), while Maryland was named for her sister Queen Mary?  The reason that’s significant – if you don’t know your British history – is that Mary was Catholic and Elizabeth (like her father, Henry VIII) was proudly protestant.  Virginia was settled first but was not welcoming to Catholics, so the Catholics moved to the eastern shore of the Chesapeake and named the territory Maryland.]

If you like epic novels, you can’t go wrong with any Michener book and certainly not with this one (I’ve read several and enjoyed every one).  Toward the end of the book he has one of the characters get messed up with the Watergate scandal.  In so doing, he gives a really interesting take on what happened, what possibly motivated some of the people involved, and how people who worked with him saw Nixon.  It’s a nuanced perspective you’d never read today (he doesn’t justify anything, he just has characters talk about why they did what they did).  That’s an example of what makes a Michener book so good.

This is a great vacation book if you’re going somewhere with a lot of time to read.  You can lose yourself in it and become totally invested in the characters.  On the other hand, if you’re not a fast reader and you don’t like long novels, then maybe this review is good enough and you can pick up something a little less epic.

2 thoughts on “Chesapeake – James A. Michener”