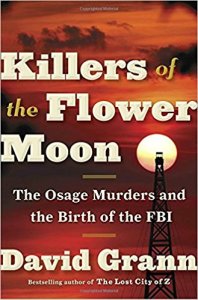 The Osage Indians of the plains met the same fate as most Indian tribes in the 19th century – they were forced from their land and made to resettle in a place no one else wanted.  In their case, it was in a rocky area of Oklahoma.  When they were resettled, however, the Osage did something that wasn’t really noticed at the time but proved to be very shrewd – they insisted on owning the mineral rights of their new land.

Fast forward to the early 20th Century and the Osage are wealthy beyond their wildest dreams.  Oil has been discovered – lots of oil – and the sales of oil-leases are bringing in gushers of cash.  Everyone is benefiting, boom-towns are being built, and the poor Indians who were forced off their lands are living the high life.  By the early 1920s, the richest people per capita in the world are the residents of Osage County, Oklahoma.

There is, however, on big negative to the Osage’s newfound wealth – the federal government’s insistence that all Osage Indians have guardians to oversee it.  In the government’s view, the Indians aren’t equipped to handle all this money themselves.  They must have a non-Indian (read: white) guardian manage it for them.  This, of course, means that every unscrupulous person within about a 500-mile radius of Oklahoma makes his/her way to Osage County.  The Indians have the money but they don’t always get to enjoy it or spend it as they wish, and/or it’s stolen from them, or worse.

The worse is that Indians start to die mysteriously.  Some are shot, some are poisoned, some are thrown from trains, some just disappear.  And in the vast majority of cases, the murders aren’t solved.  Local law enforcement is either incompetent, corrupt, or apathetic.  At the end of the day, dead Indians aren’t a big concern to anyone outside of the tribe.

One woman in particular suffers from the mysterious murders.  She loses her sister to a gunshot through the head, her mother mysteriously wastes away and dies, another sister dies in a similar way, and a third sister dies when her house is literally blown to bits while she and her husband are sleeping.  In all cases, the guardianship for the relatives’ wealth passes to her husband (who is white and who is her guardian as well).

Since local law and hired private eyes have no luck in solving the murders, the Bureau of Investigation – a relatively new law enforcement arm of the Federal Government run by a newly promoted director named J. Edgar Hoover – is brought in.  They investigate and take on the entrenched interests and eventually find a conspiracy that involves the husband, his uncle – who is the leading white man in the county and considered a faithful friend of the Indians – local medical personnel (who’ve been falsifying autopsies to make sure the crimes aren’t solved), and the very lawmen and private eyes who’ve been hired to solve the crimes.  The uncle is found to be the brains and prime mover behind the murders.  Once he’s outed and convicted (after two trials, the first of which was found to be stocked with bribed jurors who found him not guilty) – to the shock of the entire community – the reign of terror (as it comes to be known) seems to peter out.  The uncle is thought to be behind roughly two-dozen murders.

The investigation of the murders and the resulting convictions put the Bureau of Investigation on the map (note that the subtitle to the book is The Osage Murders and the Birth of the FBI).  Its agents are later granted more powers (at the time of the Osage investigation they aren’t allowed to arrest anyone, only investigate) and the bureau attains a higher profile in the Federal Government (which Hoover takes full advantage of over the next four decades).

The book pursues the story further than the FBI investigation and the convictions of the uncle and his fellow conspirators, however.  The author goes back and researches and finds that the 20+ murders ascribed to the group was just the tip of the iceberg.  By looking at records and talking to current Osage residents, he estimates that somewhere around 600 Indians were killed for their money over a roughly 10-12-year period (and were probably murdered by guardians, spouses, or anyone with a financial stake in their death).  It’s a staggering number – even more so when you consider that very few of the murders were solved (for reasons stated above).  Survivors of families decimated by the murders still feel the effects today.

As to the community today, very little of the oil wealth remains.  The Depression brought the price of oil down to less than half what it was in 1920, decimating the value of oil leases that were the source of the tribe’s income.  After the Depression the oil fields themselves produced much less oil, further dampening earnings.  Today the boom-towns are no more and the tribe’s income is mostly tied to casinos.

In some ways – as you can probably surmise – the book doesn’t tell a happy story.  That said, it’s well worth the read (even if you’ve read this capsulized version).  The author does a good job of keeping things interesting and it’s amazing as you read all that went on that’s it’s not more well-known.  Before reading the book I’d never heard of any Osage wealth or murders (and I still don’t know the proper pronunciation of “Osage”).  The only criticism I’d have of the author is he likes to inject a little drama from time to time that isn’t necessary.  He sometimes ends chapters by stating something kind of cliff-hangerish or profound just to keep the reader interested.  This isn’t a major negative, however, and doesn’t take away from my recommendation.  If you’re looking for some good non-fiction that will keep you interested and turning pages, it’s worth checking out (little library pun for you).